BOOK REVIEW: The Smithsonian Field Guide to the Birds of North America

Last week I received my copy of Ted Floyd’s Smithsonian Field Guide to the Birds of North America and after spending some time reading it through, I have finally sat down to write a review. Below I give you my “In a nutshell” which is basically a summary of my thoughts regarding the book. Following the summary is a more in-depth review of each aspect of the book. At the end of the review I provide some pros and cons, as well as my final conclusions. Overall I’m very impressed with this photographic guide, which is saying a lot given my usually strong preference for illustrated field guides. Here’s my full review…

But the book doesnâ€™t stop there. Interspersed throughout this slightly-larger-than-expected field guide are up-to-date essays on topics such as Populations Dynamics, Biogeography, Migration, and Brood Parasitism, reminiscent of the essays in the classic Birderâ€™s Handbook by Erlich, Dobkin and Wheye. 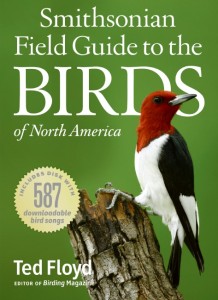 The book is divided into taxonomic sections, each one preceded by a description of the bird families that follow, including interesting facts on current taxonomy, status changes, and defining characteristics. Itâ€™s obvious from the moment you open this book that Floyd is a birder at heart (okay, so he is the editor of Birding Magazine, the major publication of the American Birding Association (ABA)), as he includes the ABA code status for each of the over 700 species depicted. What the coding system offers, though, is a quick interpretation of rarity and geographic extent of each species.

Also included with this tome of North American Birds is a DVD with 587 bird recordings for 138 species, all recorded in fine detail by Lang Elliott, a master of nature recording. Taken as a package, what youâ€™re really getting is much more than a field guide, but rather a multimedia identification manual to North American birds and their behavior.

To me, what makes a good field guide is the ability to pick it up after seeing a bird, and quickly narrow down the possibilities. When I opened up the Floyd guide, I was immediately drawn to the quality of the photographs. Field guides have evolved a long way over the last century, but with this evolution has also followed a great increase in photographic quality. WOW! These images really pop out of the page. This book is clearly the next generation of photographic field guides. That said, there are a couple of features missing from this guide that are found in several other popular field guides.

First is the absence of pointers placed on the photographs marking key features for clinching identification (and/or italicizing the important field marks within the textual description of the species).

The second is the lack of a key to the major taxonomic groups (be they families or orders) at the beginning of each taxonomic section, which would allow the reader to quickly identify the group that the bird they are observing belongs to (for instance, suppose youâ€™re watching an Eastern Meadowlark. By having a page of the Icterids, blackbirds and their allies, you would quickly be drawn to the meadowarks and their respective page number).

The result is that the beginning birder will both need to search more before locating the group in which their bird fits, and also need to read the species accounts more thoroughly to find the key characters useful in field identification, both of which can be frustrating until the birder becomes familiar with bird topography and bird diversity in general. Thankfully, Floyd does a good job of covering the basics within his introduction.

The layout is very appealing, making use of all available space while maintaining an uncluttered appearance. I especially appreciate the well-written introduction and emphasis on holistic birding. Floyd suggests that the reader spend more time observing the species within its context, paying attention to behavior, habitat, flight, etc. This idea is translated into each species account through the combination of photography and carefully selected textual and graphical information.

Each species is represented by multiple photos depicting the important age and/or sex-based variation. Each image has a caption with information on the actual bird in the photograph (age, sex, breeding status, etc.), a concise description of main characters to focus on when observing the species in the field, and the location and time of the year of the photograph. These are all critical pieces of information for making a photograph useful in field identification.
Below the photograph are standard measurements of length, wingspan, and weight, followed by three bullets highlighting important information on molt cycle, individual variation (seasonal, sex and/or age-specific), and key plumage characteristics. Following the bullets is a broader description of the species including its ecology (habitat, etc.), especially when it is helpful in separating two similar species (â€œâ€¦where both species nest, separation according to vegetation height is often strictly observed.â€), and status (â€œâ€¦ numbers declining due to habitat deterioration on breeding and wintering ground.â€).

For each species Floyd presents a color-coded range map depicting all the necessary information on breeding, wintering, and migration zones, as well as areas where the species occasionally occurs out of its range. Kudos to Paul Lehman (a geographer by trade) who produced the maps and whose understanding of North American bird ranges is second to none.

Vocalizations and the Birdsong DVD

Lastly, Floyd provides a description of the typical vocalizations (song, call, chip, grunt, bill snap, etc.) for each species. While having textual descriptions of vocalizations is somewhat helpful in the field, as part of this “next generation” field guide theme, Floyd also provides a birdsong DVD containing 587 mp3 recordings of 139 species of birds commonly occurring in North America. While this is by no means a comprehensive collection of birdsong, it is a very nice treatment of common species. On most other birdsong compilations, each species is usually only represented by one or two recordings (usually a single song, repeated several times, followed by some call notes). Still, it would have been nice to see more of the confusing species represented on this DVD, especially since this is intended as a field guide to all birds found within the ABA area.

The real strength of this disc, though, is the thorough treatment of each species covered. For instance, under Blue Jay (a species with a very expansive vocal repertoire) there are eight separate recordings, highlighting regional (calls from Arkansas, New York, and Florida) and contextual (territorial vs. courtship) variation. Another especially vociferous songster of eastern forests is the Carolina Wren, and this disc really covers the gamut, from the typical â€œtea-kettle tea-kettle tea-kettleâ€ song, to the lesser covered but equally important â€œcheerâ€ â€œdipâ€ and â€œt-dinkâ€ calls. After a bit of studying, youâ€™ll never again be fooled by the many sounds of the Carolina Wren, and more importantly you’ll know when you’re hearing something different than the common birds you’ve learned through this extensive treatment.

On a more personal note, I canâ€™t stand when the name of the species is read before the track plays. I like to listen to birdsong at a high volume, in order to pick up on the nuances of the recording. This becomes ever more difficult when each track is preceded by an extremely loud, monotonous voice announcing the name of the species. â€œCAROLINA WRENâ€ the voice screams at me, or â€œMAGNOLIA WARBLERâ€ blares from my speakers before the song actually playsâ€¦ itâ€™s enough to drive me nuts.

Thankfully the Smithsonian Field Guide companion DVD avoids the monotonous voice-over and instead replaces it with a beautiful digital photograph of each species, which displays automatically if you are using iTunes on your computer, or playing the tracks on your iPod. Because each track is named, even if you donâ€™t see the image, you can determine the species based on the track name displayed on your computer. The DVD cannot be played on a traditional CD player, but you can copy the tracks to your computer and later burn them to a traditional CD… then you’ll just have to use the liner notes to decipher what species you’re listening to based on the track number.

The new Smithsonian Field Guide to Birds of North America, by Ted Floyd, will be a welcome addition to any North American field guide collection. While a bit on the heavier side, and lacking a few helpful features for the beginning birder, this guide provides a wealth of field identification information in a very accessible format. Aside from the beautiful layout, fine authorship, and up-to-date species information, the companion birdsong DVD (despite the limitations mentioned previously) really makes this package two guides for the price of one.

7 responses to “BOOK REVIEW: The Smithsonian Field Guide to the Birds of North America”