I had way too much fun at Point Pelee to just walk away and not follow through with the coming migration, despite my return to Madison, Wisconsin. So, here’s the forecast as I see it:

Winds start out of the northwest which typically precludes migration, but they will turn southerly throughout the night which should allow birds to migrate into the region throughout the late tonight and early morning tomorrow. The magnitude of migration will depend on whether the winds slacken enough and/or how early they switch around to the south. Birds to our south have been in a holding pattern for several days so are primed to migrate, so expect them to go at the first opportunity.Â Expect more Yellow-rumped (Myrtle) Warblers, and Warbling Vireos to arrive on Tuesday as they’re quite plentiful on the south shore right now.

Winds will have turned southerly by Tuesday morning meaning diurnal migrants will be arriving throughout the day. Cloud cover may preclude any major arrival of soaring raptors, but the time is right for Mississippi Kite, so keep at least one eye to the sky!

Winds will have turned around to the south on Tuesday and continue to be out of the south (and southwest) throughout the night and into Wednesday morning. Expect heavy migration into (and out of) the region on Tuesday night. With no precipitation or opposing winds to put birds down on Wednesday morning, many birds will move clear over Point Pelee throughout the night. Anyone interested in nocturnal flight calls should find a sheltered location on Tuesday night to listen for birds migrating overhead.

By Wednesday morning expect new birds to be present throughout Point Pelee NP as well as the entire northwest shore of Lake Erie. Because of the widespread nature of the migration event, finding concentrations of birds will be more a function of geography than weather. In cases like these it’s best to hit the known spring hotspot areas, or those areas which typically hold birds in spring. Given the warm temperatures and clear skies, expect high thermal activity throughout the day. This will trigger diurnal raptor migration throughout the region and may produce some interesting birds such as Mississippi Kite.

I will continue to post the animations for the nearby radar through Wednesday morning, to see how it plays out. I will appreciate your feedback in the comments section of each post so we can both better understand the relationship between migration across the landscape and birding conditions at Point Pelee NP. 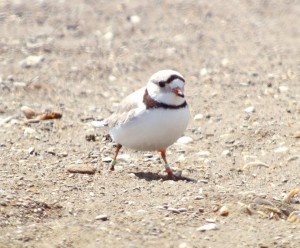