A bat book you won’t be able to put down

There are great scientists, and there are great communicators, and then there are those who can can communicate science extraordinarily well. I often think of this Venn diagram, and of how much I value the area of overlap between the two spheres.

Aldo Leopold’s A Sand County Almanac, Scott Weidensaul’s Living on the Wind, David Quammen’s Song of the Dodo…these are some of the books that I go back to time and time again to bathe in the exquisite writing and drink in the massive content of ecology, biology, physiology and conservation.

Complex scientific content broken down into accessible concepts and wrapped in adventurous storytelling.

Today I add another book to this canon of science literature. A book I honestly had sitting on my shelf for over a year before picking it up, on a whim, because of an experience I had over the summer in Panama. I had been out checking a moth light trap in the highlands of western Panama when I heard what I assumed was some bat activity overhead. I retrieved my microphone and did some recording of the night sky. When I returned home, I transferred the recordings to my computer and attempted to listen to them again. I could hear intermittent chittering, but the graphical spectrogram told a different story. There were many sounds apparently in the upper registers of the recording, outside of the human hearing range. I lowered the pitch to bring them into range (see below for link to recordings), and immediately experienced a chorus of bats; bats hunting the moths which were coming into the light. It was a whole new world of natural wonder, and one that I frankly had been ignoring all these years. A week later I was heading to Colorado for work, and searching for something to read on the plane. I looked over the stack of unread books on my desk and immediately zeroed in on one, The Secret Lives of Bats, by Merlin Tuttle. The name sounded familiar…was this the guy who took the amazing photos of bats pollinating Saguaro cacti in the Sonoran Desert? (spoiler alert: yes, he is).

I am so glad I picked it up. 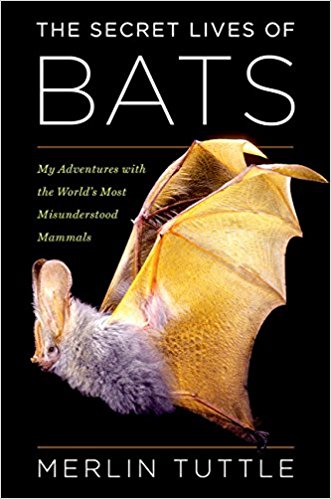 I read a good half of the book on my flight to Colorado, and devoured the rest on the return trip. From Merlin’s earliest recollections of his first encounters with Gray Myotis bats, to his multiple near-death experiences studying bats around the world, to the numerous scientific breakthroughs he and colleagues made through their observations over the years; this is as much a story of human perseverance and dedication as it is about bat biology and conservation. On several occasions my heart was pounding in anticipation of the next paragraph, and throughout the book I was enraptured with the complex and exquisite life of bats portrayed by a man who has dedicated his life to their survival. This book demystifies the undeserved stereotypes of bats, and provides hope for the future of bats, both for their important ecological services they provide to humans, as well as their intrinsic value as fellow residents on planet earth.

You will likely recognize some of the photos presented in the book, especially those of bats pollinating, feeding, and rearing young, from the pages of National Geographic. Tuttle peppers the book with descriptions of these photography excursions which provide a behind-the-scenes view of some of the most iconic bat photographs ever made. In the age of White-nose Syndrome and other very real threats to bats globally, it is refreshing to read a living history of previous threats and conservation measures which have worked to restore several species to sustainable numbers. Will we be able to save our future bats from the things that threaten them today and tomorrow? As Tuttle demonstrates in The Secret Lives of Bats, one key element is removing the unfair stereotypes of these charismatic mammals by shining a light on that which is typically only found in the dark. I, for one, am now on a mission to learn more about our local and regional bats, and to consider how I will be a force for their conservation. I have also relocated The Secret Lives of Bats to my “must read again soon” bookshelf.

You can purchase The Secret Lives of Bats through Merlin Tuttle’s website here:
http://www.merlintuttle.com/book/

The same recording as above, but pitch-shifted  down 12 kHz: https://archive.org/details/VOC1707040349TotumasBats1HPFiltPitchShift12

This entry was posted in Book Review. Bookmark the permalink.