Another push into the Mid-Atlantic

High pressure across most of the US last night open the doors for another flight of birds into the Mid-Atlantic and some of the Northeast region. While migration was much heavier in the central part of the country… 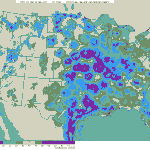 …a decent flight could be seen across New Jersey and into southern NY. Here’s the radar from sunset last night thorough 5:00am this morning.

Frames are every 1/2 hour. Click on the thumbnail to view the full-sized animation.

Light and variable winds under clear skies is usually a recipe for migration. With birds chomping at the bit to reach their breeding grounds at this time of year, though, it’s all but a guarantee. That’s what we saw last night across most of the US from the Rockies to the Atlantic. Migration out of Virginia was heavy and primarily on a S->N trajectory, putting most birds in the DC area, southern PA, and the western Delmarva. Over New Jersey the trend continues with the highest densities moving along an inland route from Heislerville NJ along the Delaware Bay shore up to Sandy Hook, in the northeast corner of the state. Densities, of course, are higher to the west since the source of most birds coming this way lies along the Appalachians. Therefore expect the highest densities of birds to be at inland migrant traps along the Delaware River, interior ridges, and habitat “islands” within highly urbanized landscapes (city parks, etc.). Sandy Hook should again be good today with light NNW winds being reported this morning, and Garret should also given its track record as a spring migrant trap on interior flights.

Looking ahead it seems like we might see the weather systems across the US begin to organize again, with a strong low forming over the Midwest by Tuesday night. Unfortunately right now it looks as if it’ll stay put over the Central Flyway and cause a great series of flights out of the Gulf states into the northern US with no sign of moving eastward to the coast. Thusfar the outlook for the World Series of Birding is a little thin as far as coastal migration is concerned. While we’re still too far out to say for sure, it looks like some southeasterly winds might be on tap for Friday night through Sunday morning… not the best conditions for those of us doing the Cape Island Cup (which means we need to work extra hard to pin down all of the breeding birds in the area!; although those doing the whole state will likely have some migrants up in the NW corner).

Again, at this point we’re too far out to say anything definitive, but keep an eye on woodcreeper.com and I’ll post updates as we approach the weekend. Also, please consider supporting our WSB team, the Rutgers Scarlet Knight-Herons! We really need your support!!!

One Response to Another push into the Mid-Atlantic